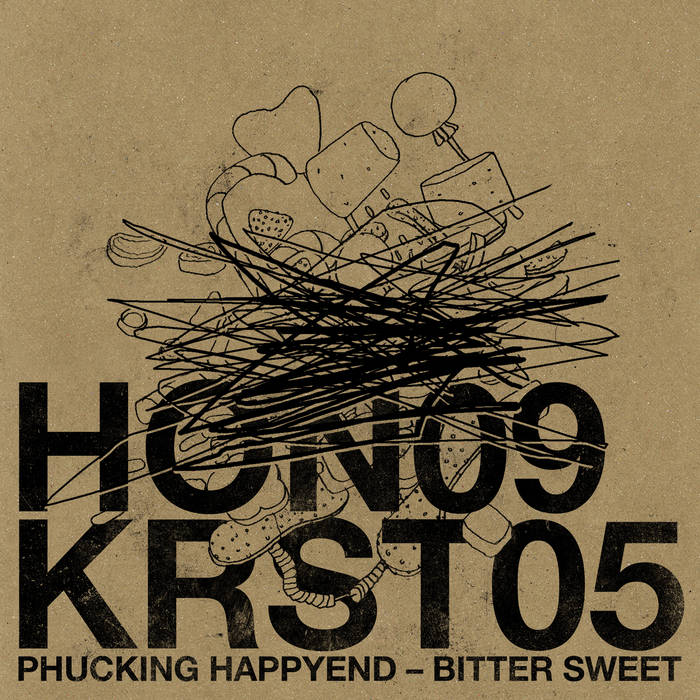 With the original track Bitter Sweet, Phucking Happyend sets up the prototype of a floor killing track: walls of synth-sounds, piling up arpeggiator figures and a stepping beat aim at the floor from the first moment on -- a key track in any Wonky, Abstract Hip Hop or Rave-Set.

The remixers focus on other elements: Red Bull Music Academy 2011 participant Kackmusikk sends the percussion back to the 80ies in his „Kackmusikk Changes Everything Remix" - the stabs, thundering snares and sweet vocals, work the woofers in the best Footwork manner.

On the flip, Nik! focusses on the offbeat, the organ stabs and the bleeps: his „Candy Dub" adds an acid bass line to the original and rolls out at smooth 132BPM.

Somtek caters for the pressure from way down: his „Phaser Edit" rolls and rattles over a bed of distorted kicks, while the arpeggiator sounds fly through the room and connect Dubstep patterns with Glitch sounds.

Footwork, Wonky, Dubstep, Rave: these tracks are a hommage to the bass- oriented dance floors around the globe and they prove the quality of an emerging generation of producers who develop current musical styles further with independant tracks further.

The Original Version was mixed by Demegy

The Bitter Sweet EP is distributed by Godbrain Distribution.